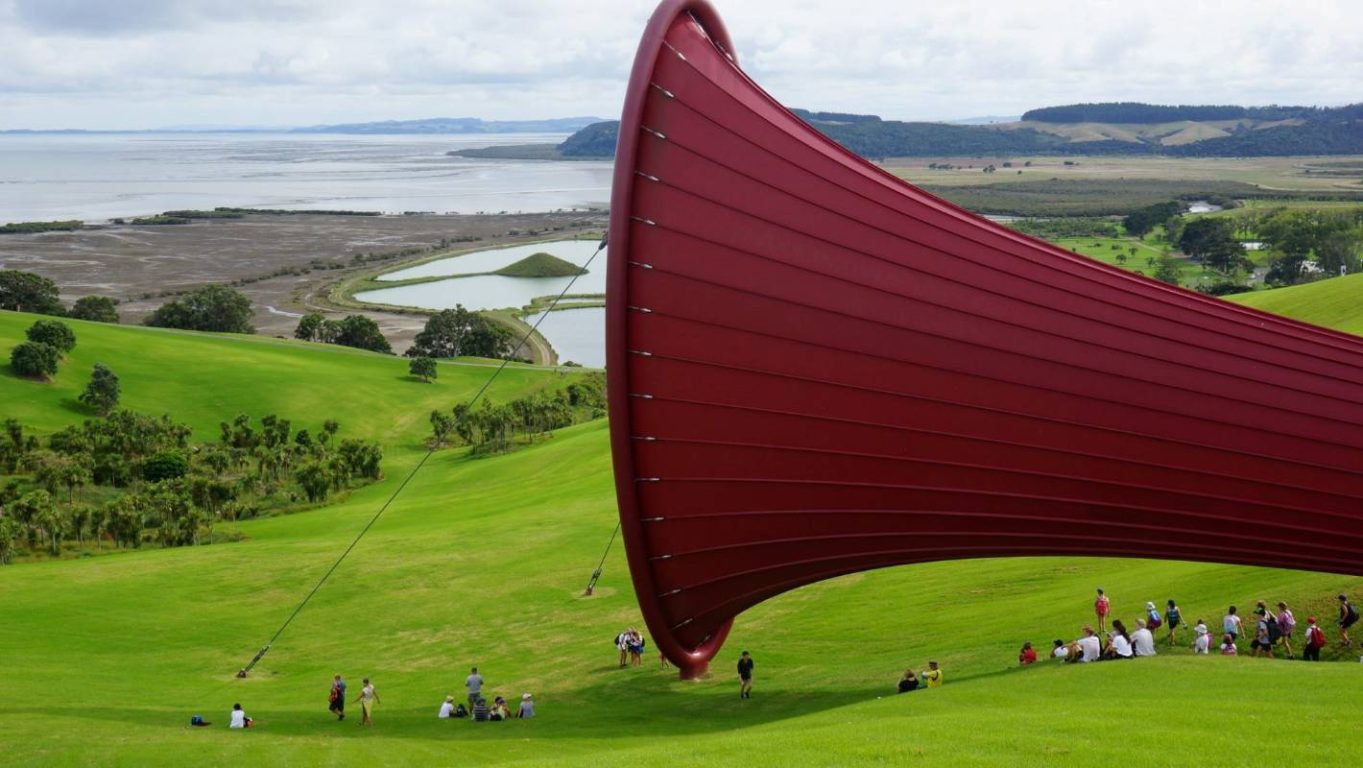 Step into the Great Outdoors and be wowed by New Zealand’s Sculpture Parks, some showcasing works on an epic scale, in glorious settings.

We have some fine outdoor sculpture exhibitions, and terrific galleries that show sculptures, and many of our towns and cities have great arts trails (take a bow Palmerston North). But how are we placed for bona fide sculpture parks? Not bad at all. From north o south, check out some of the best.

Brick Bay Sculpture Trail is superb and its also been a catalyst for the creation and sale of some beautiful sculptures since opened in 2007. Aware of the challenge artists face to finance and display large-scale outdoor pieces, Brick Bay Vineyard’s owners Richard and Christine Didsbury established a trust to help with seed funding and provided a setting that could live up to the work. Located on an 80 hectare property in coastal Matakana wine country, the two-kilometre trail takes in vineland, pasture, wetland, and a gorgeous piece of second-growth native forest, with views across the water to Kawau Island. The 60-strong sculptural display is regularly refreshed as pieces sell, but it has been consistently excellent from the start, drawing on leading talent such as Virginia King, Gregor Kregar, Robert jahnke and Chris Booth. Although the works aren’t site-specific, when you come upon a piece in the forest or beside a dreamy lily pond it will seem made for the place. Afterwards, check out the Noel Lane-designed Glass House.

Rich-lister Alan Gibs has instigated something mighty on his place overlooking the Kaipara Harbour. The scale of the property at the edge of one of the southern hemisphere’s largest harbour, is matched by the ambitious commissioned work displayed. This is New Zealand’s biggest large-scale outdoor sculpture, involving leading local and international artistic talent. The image you often see in the header image is Anish Kapoor’s extraordinary Dismemberment. Composed of 85 meter rods of PVC membrane stretched between two steel ellipses on either side of a cleft in a ridge, it’s both trumpet-like and fieshily anatomical. On another hilltop, Neil Dawson’s trickster piece Horizons gives the illusion of a monumental piece of corrugated iron snagged in the landscape. Elsewhere, Richard Serra’s Te Tuhirangi Contour is a 250m-long ribbon of towering cotton steel that unspools across folds of pasture like, well, a contour line. There are playful pieces – Jeff Thomson’s six-metre high corrugated iron and steel giraffe – and graceful ones, such as the mystical spiral of Gerry Wail’s Jacobs Ladder, but they’re all bold works. (Check the website for scheduled open days.) gibbsfarm.org.nz

THE SCULPTURE PARK AT WAITAKARURU ARBORETUM

This sculpture park demonstrates the power of the imagination – and we’re not talking about the art. Three decades ago the 1.5 ha property near Tauwhare east of Hamilton was a disused greywacke quarry, as bare a piece of earth as you’ll find. Dorothy and John Wakeling took it on with a vision of regenerating the land. Three decades and 20,000 trees later, Waitakaruru Is barely recognisable as a former quarry. Other than for the odd feature such as the quarry cliffs, which make a bandy backdrop for occasional musical performances. Meanwhile, the sculpture park has grown to a 100s odd works deployed along a two-kilometere looped trail. It’s a quirky, playful collection that kids will enjoy as much as parents. sculpturepark.co.nz

Another island, another reclaimed quarry. Iron Ridge Quarry, 50 minutes north of Christchurch, is sculptor Raymond Herber’s family home, forge/workshop and outdoor showcase. Herber, a former welder and I blacksmith, bought the abandoned Amberley Lime Works and associated dilapidated buildings in 1997, to the bemusement of some locals. He trucked in endless loads of topsoil from a nearby farm, then planted heavily in natives. Backdropped by limestone hills, the unlikely garden provides an appealing exhibition space for Herber’s often whimsical steel and stainless-steel sculptures. There are large kinetic works and more intimately scaled pieces, but the undisputed star is a 2.5m-high polished steel Clydesdale named The Gentle Giant. Located within easy striking distance of several Waipara wineries, Iron Ridge makes a nice change of pace between cellar doors. raymondherber.com

Sir Miles Warren’s Ohinetahi is less a sculpture park, and more of a heritage property and garden with sculptural enhancements – but what a garden, and what enhancements. Set on a 1.25ha property at the edge of Governors Bay, this Garden of International Significance combines formal planted “rooms” with sweeping lawns, woodland trails and an amphitheatre with a view up Lyttelton Harbour. Scattered throughout is the odd architectural fragment and two dozen large-scale contemporary sculptures, including pieces by Neil Dawson, Andrew Drummond and Graham Bennett. Keep an eye out, too, for Virginia King’s Heart of Oak, a mandala-like disc of gleaming steel suspended above the creek in the Wilderness Garden. When you’ve finished exploring the garden, take a look at the Category 1 homestead, which Sir Miles repaired and reworked after it was badly damaged by the Canterbury earthquakes in 2010, and spend time in Ohinetahi’s two galleries. The first displays work by prominent New Zealand artists, the other is dedicated to 3D models and photographs of landmark Warren & Mahoney buildings. The architect gifted Ohinetahi to the nation in 2012. ohinetahi.co.nz

On the way to Banks Peninsula lies the little settlement of Tai Tapu, home to an 1850s tavern, an 1870s school, and “New Zealand’s favourite nine-hole golf course”. It’s also home to a combined sculpture garden and native tree regeneration projects, that parks more than you might think in a single hectare of bare paddock. The Tai Tapu sculpture garden is the brainchild of Peter Joice. Since 2010, 8000 shrubs and podocarp trees have been planted alongside the regeneration push. The founders have put together an impressive collection of sculpture that draws heavily but not exclusively on Canterbury-based talent, including Lew Summers, and Doug Neil. Alison Erickson and Andrew Drummond. taitapusculpturegarden.co.nz

Okay, so this one is going to set you back a $550 hit in fact, for a round of 18 holes at the Hills. Sir Michael Hills private golf course and sculpture park at Arrowtown. (Visitors are advised to book well in advance.) But befitting the central Otago landscape, the sculptures are monumental and often dramatic. Take Liu Ruowang’s The Wolves Are Coming, an installation of 110 cast-iron wolves closing in on a three-metre-high warrior near the 18th hole. There’s a seriously lifelike 3.6m-high seated man by British sculptor Sean Henry, a Max Patte Solace in the Wind, and a Paul Dibble cast-iron piece of horseplay called The Calici Scythe involving a monumental rabbit-like figure standing triumphantly atop a pair of smiling lips on a hall atop a cube. When you’ve reached the 18th hole, check out the striking concrete and glass clubhouse designed by Andrew Patterson. thehills.co.nz

Launched in 2015, the Poison Creek Sculpture Project provides “a place of solitude for selected sculptors and other artists to spend time, and as a location to exhibit sculpture in the wild. Sited in the Queensbury Hills midway between Cromwell and Wanaka, the views are of raw hills, big skies and the brooding immensity of the St Bathans Range. Nearer to hand, among boulders and tussock, is sculpture by Tanya Ashken, Andrew Drummond, Terry Stringer, Richard Mathieson and others. Poison Creek is open to the public on selected weekends during summer and autumn, or book a night in the new on-site cottage for two. poisoncreek.nz 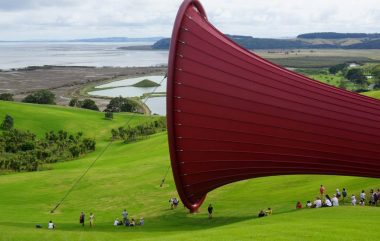 Step into the Great Outdoors and be wowed by New Zealand’s Sculpture Parks, some sh...

A luxe long weekend in WELLINGTON

Wellington knows how to do style, and with major international sp... 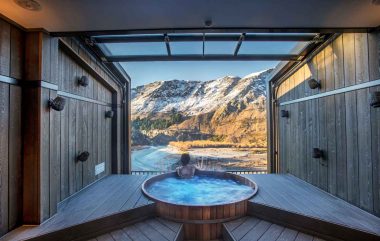 From the rustic geothermal delights hidden deep in the bush to high-tech aquatic wonderland, Aote...